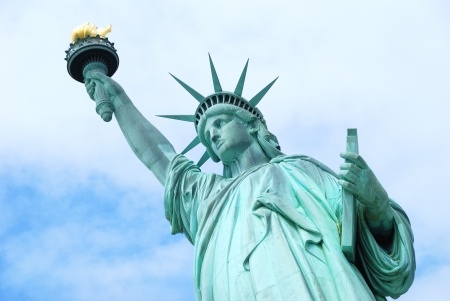 One of the oldest cities in America, New York City is home to many beautiful and interesting historical landmark. Many of these sites lie in or near the waters surrounding the city. Whether you are learning about the city’s deep history for the first time, or further exploring the place you call home, a historical tour with Eastern Star Yacht Charters is an exciting yet informative way to spend an afternoon!

The history is rich, from the oyster beds that proliferated Manhattan’s shores to the location where Typhoid Mary was quarantined. Create your dream tour down to the menu, and choose which historic attractions you would like to visit and discover more about while enjoying a relaxing day on the water with friends and family. A tour guide can be hired as well for an enhanced experience. Here are some of our favorite historical attractions:

Sail past the Statue of Liberty, created by French sculptor Frederic Auguste Bartholdi, as an image of “Liberty Enlightening the World.” This famous and beautiful statue stood as a beacon of hope for immigrants travelling to Ellis Island and the United States.

Called Gull Island (among other names) before its transformation into the first Federal Immigration station, Ellis Island was rich with oyster beds and has held a hanging site for pirates, a harbor fort and ammunition depot, and an immigration station. Now a historical landmark, Ellis Island has a fascinating and rich history as old as New York City itself.

Found in the East River, North Brother Island contained a hospital to contain those suffering from diseases like typhus, smallpox and yellow fever. Typhoid Mary spent over twenty years on the island until her death in 1938. The island is now off limits to the public and is home to one of the largest nesting colonies of Black-Crowned Night Herons in the area.

Sail down the Hudson River past Midtown and take in the sight of the many famous skyscrapers, including the Chrysler Building, Empire State Building and One World Trade Center.

Pass under the oldest bridge in NYC to still carry passengers. The first steel suspension bridge built, construction for the Brooklyn Bridge began in 1869 and was finished in 1883. It was the first bridge to connect Manhattan and Brooklyn.

Recently opened to the public, Governors Island was a military base for the British Army, U.S. Army and Coast Guard for over 200 years. Now managed by the Governors Island Preservation and Education Corporation, the island is now called New York City’s “Playground for the Arts.”

This historic area of New York City was built on what was once the busiest port in America. One of the most popular locations in the area, the Fulton Fish Market, once fell into the river. The Titanic Memorial can be seen at the west end of the port.

Interested in spending a day out on the water with Eastern Star Yacht Charters? Contact us today to begin planning your historical tour of New York City!