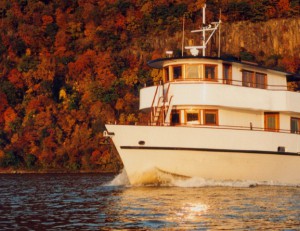 The Hudson River is a beautiful natural setting that has a lot of historical significance for the region and the United States overall. The river was one of the earliest discoveries of America’s natural wonders and is a big reason why New York City grew as large as it did over the years. For your next corporate event or private party, take your guests on a scenic tour of this renowned waterway.

The Hudson River was first discovered in 1609 when Englishman Henry Hudson navigated the river, attempting to find a waterway through America to provide possible access to China. Areas surrounding the river were first settled by the Dutch, although early maps contain details of snakes and other hazards that indicate that many felt the area was highly uninhabitable.

During the Revolutionary War, the river became a major point of strategic focus for a number of battles and skirmishes. Ferry crossings at Plum Point, Verplanck and Fishkill were critical for provisioning troops situated in camps across the northeast. Although the British were never able to hold the river during the war, they attempted to take it so as to sever the New England and Middle Atlantic colonies. Holding the Hudson River may have saved our nation before it even began.

The river is also the setting for a number of other important parts of American history. The Hudson River Valley is home to the country residence of Washington Irving, the author of The Legend of Sleepy Hollow and a revered American writer. West Point, one of the country’s most renowned military schools, is situated close to the river. During the 1800s, the river saw a massive boom of mansion construction in areas such as Hyde Park and Cold Spring.

There is so much classic Americana to enjoy when taking a cruise along the Hudson River. For your next business event, consider taking your company on a tour of one of America’s most historic waterways without traveling far from the city. Eastern Star Cruises will guide your private party along your way.